US Senate push to ban abortions on health insurance 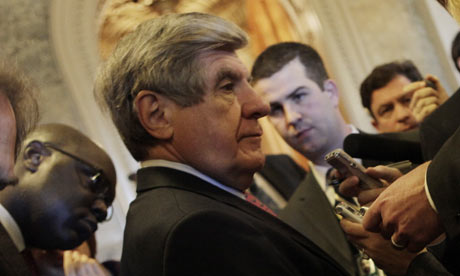 US senators are expected to vote tomorrow on changes to healthcare legislation that would stop medical insurance schemes from paying for terminations, as the battle over abortion rights moves back to the US Senate.

The issue is proving among the most divisive in the healthcare debate, along with proposals for government-funded medical insurance. The Senate debate on the abortion restrictions opened the day after Barack Obama met Democratic party senators to appeal for them to overcome policy differences on health reform and consider the broader sweep of history. He described the reforms as the "most important social legislation" in decades, while Republicans are predicting the president will meet his "Waterloo" over a signature campaign issue.

A Democratic party senator, Ben Nelson, introduced an amendment today modelled on a similar measure passed by the House of Representatives that effectively blocks women from obtaining an abortion on heath insurance other than in cases of rape, incest or when the mother's life is in danger.

The proposed legislation bars public funds from being used to pay for terminations after a lobbying campaign by the Catholic church and rightwing fundamentalist Christians was instrumental in forcing the issue on to the healthcare agenda. Pro-choice groups say the effect will be to bar most terminations from being paid for by medical insurance because almost all plans will be touched by government subsidies.

Click here to read more
Posted by group5a at 9:21 PM