Obama's ex-doctor: Insurers 'screwing it up' 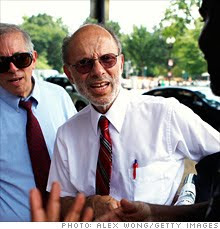 Obama's ex-doctor: Insurers 'screwing it up'

Chicago physician says companies are telling doctors how to do their job.

NEW YORK (CNNMoney.com) -- President Obama's former personal physician of 22 years, Dr. David Scheiner, has been very vocal on the issue of health insurance, particularly with his criticism of commercial insurers and how he feels they are meddling with the doctor-patient relationship.
Scheiner has publicly stated his support for a government-run "single payer" system.
CNNMoney.com spoke with Scheiner, with Advocate Medical Group in Chicago's Hyde Park, earlier this week about his experiences and frustrations:
You've said in interviews that insurers are making it increasingly difficult for doctors to do their jobs. Can you give some examples?