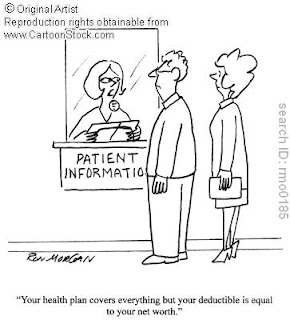 Recently, America has been struggling with health care insurance coverage and Congress is working hard to reform the way things are right now. One problem with our current method is that doctors and insurance companies have an awkward relationship as to what is covered by doctor visits. The current health insurance system promotes doctors to operate less effciently than they normally would and encourage more follow-up visits to make sure that they get reimbursed for their services. This puts an added pressure on the patient as well, who has to make more copays and does not get treated as quickly as they could for certain conditions.

Many people are getting denied certain options by doctors since they are not covered by their insurance or are being expected to pay outrageous costs for certain services that the insurance companies are not able to cover. In a blog on CNN.com, a patient who underwent hand surgery said, "To be fair, the insurer should pay the bill according to the network charges since the doctor and facility used for the surgery was in the provider's network." He was scammed into having to pay for a large portion of his surgery since he was not told ahead of time that his insurance would not cover certain parts of it.

The current system clearly has some fundamental flaws in it that need to be addressed by the government. Underway right now, many Democrat senators are proposing a bill to make health insurance much more affordable for those who are not as wealthy and have significant healthcare needs. Everyone is entitled to a basic healthcare plan and the insurance companies should be more cooperative with both the patients and doctors to improve our current system.