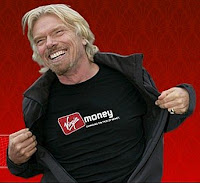 Virgin Money's car insurance products are expected to be underwritten by Auto & General Insurance Company, one of the largest South African insurers that is looking to expand Australian operations.
While Virgin Money entered Australia five years ago when it broke a deal with Westpac for a discount credit card, the contract ended 12 months ago with the bank taking on 750,000 customers after paying a $39 million fee.
But now Virgin is set to re-enter the market with the new Citibank deal, with the first credit card due for introduction next July along with online retail savings and deposit accounts due over the coming months.
It is expected that Virgin will provide the majority of the branding and marketing while Citibank will deal with the complex banking infrastructure, a similar structure to Branson's other endeavours.
Matt Baxby, managing director of Virgin Money Australia, said in a statement: "This agreement, with its comprehensive range of banking product, is a first for the market. The partnership with global banking leader Citibank represents a new focus and direction for the Virgin Money brand in Australia, and will provide Australian consumers with increased choice."
Virgin Money's new products come after his opinion piece in a British newspaper that stated the banking sector must see new competition in order to avoid another financial crisis.
"We must ensure that we prevent such a crisis again - but we must also bring back competition if we want the consumer and small businesses to be protected," he said. The announcement comes as Branson told reporters in Brisbane that he might have delayed V Australia's launch if he knew the global financial crisis would occur.
"If we knew the world would have plunged into recession when it did, would we have done it at that time? I don't know - we might have done. We may have delayed it a year."Branson was in Brisbane to celebrate Virgin Blue's ninth birthday, despite the company recording a net loss of $160 million for the 12 months ending 30 June, from a net profit of $90 million in 2008.

Click here to read more
Posted by group6a at 1:24 PM