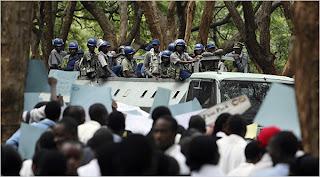 An article in the British medical journal Lancet paints a devastating portrait of the collapse of Zimbabwe’s health care system, once one of Africa’s best. Although the article never mentions President Robert Mugabe by name, it suggests that his authoritarian rule, stretching back nearly three decades, is largely to blame.
Life expectancy in the country is now just 43 years, because so many young adults die of AIDS. But the article, whose lead author is Dr. Charles Todd, a former chairman of the University of Zimbabwe’s medical school, points to many failures that government could have prevented.
Maternal mortality more than quadrupled from 1990 to 2007, to 725 mothers’ deaths per 100,000 live births. In 1994, 80 percent of children received all their basic vaccines; by 2007, only 53 percent did.

Click Here to Read More
Posted by group2b at 4:15 PM