Obama Insists Insurance Will Be Affordable 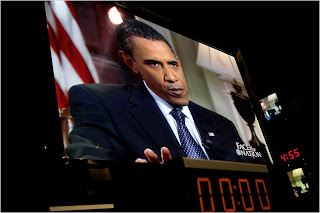 WASHINGTON — President Obama on Sunday pushed back against the argument from liberal Democrats that the leading health care bill in the Senate would place a new financial burden on the middle class, saying in a series of television appearances that insurance would be made affordable through a competitive exchange and subsidies.

As the Senate Finance Committee prepares to take up the legislation this week, the White House is trying to hold together fractious Democrats, particularly those who believe that the plan is not generous enough for people required to buy insurance. Mr. Obama argued that the proposal was not a bad deal for the middle class and that it could not be called a tax hike.
“Right now, everybody in America, just about, has to get auto insurance,” Mr. Obama said on “This Week with George Stephanopoulos” on ABC. “Nobody considers that a tax increase.”

Click Here to Read More
Posted by group2b at 1:40 PM