Relief Seen for Jobless and States in Health Care Plan 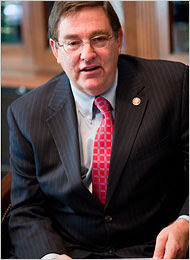 The stimulus bill working its way through Congress is not just a package of spending increases and tax cuts intended to jolt the nation out of recession. For Democrats, it is also a tool for rewriting the social contract with the poor, the uninsured and the unemployed, in ways they have long yearned to do.
With little notice and no public hearings, House Democrats would create a temporary new entitlement allowing workers getting unemployment checks to qualify for Medicaid, the health program for low-income people. Spouses and children could also receive benefits, no matter how much money the family had.
In addition, the stimulus package would offer a hefty subsidy to help laid-off workers retain the same health plans they had from their former employers.
Altogether, the economic recovery bill would speed $127 billion over the next two and a half years to individuals and states for health care alone, a fact that has Republicans fuming that the stimulus package is a back door to universal health coverage.
Click Here to Read More
Posted by group1a at 10:36 AM